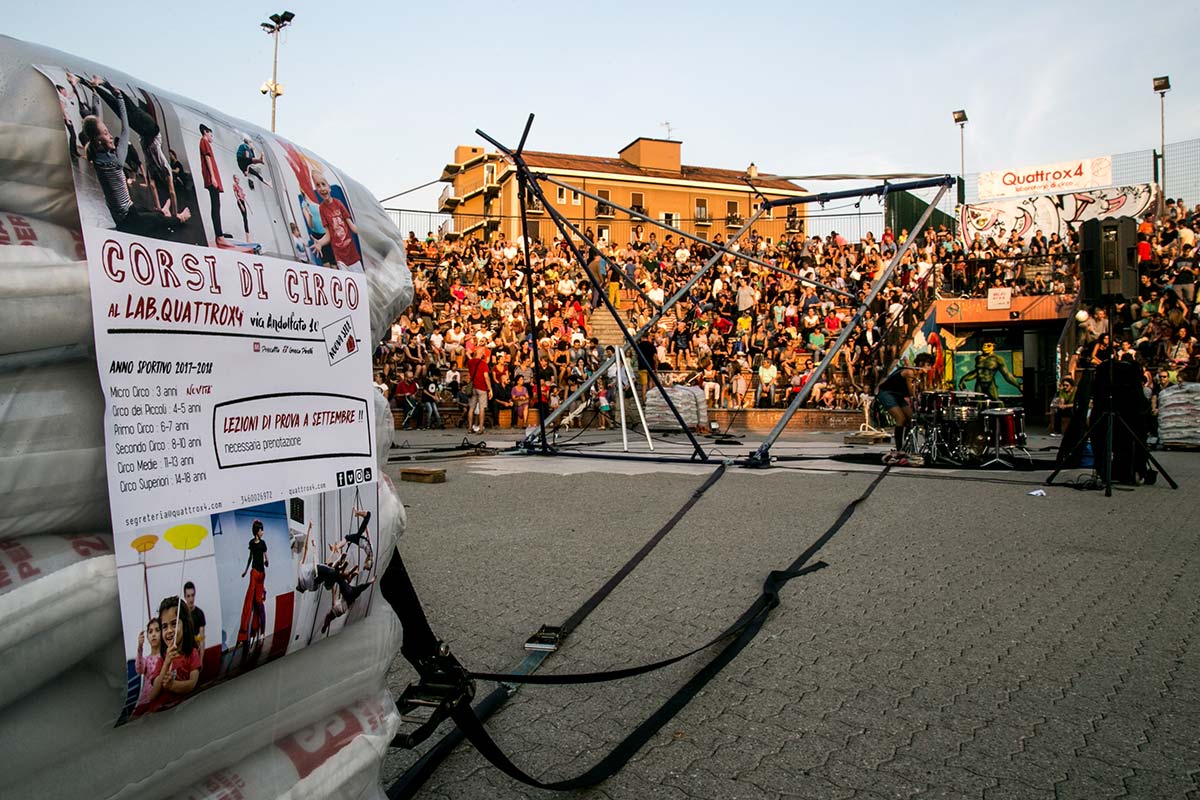 What are we doing?

Quattrox4 (“Four by four”) is a contemporary circus center based in Milan. Founded in 2011 by Marco Dellabianca, Clara Storti, Filippo Malerba, and Elisa Angioni, Quattrox4’s mission is to promote contemporary circus both as a physical activity and as a cultural practice in Milan. We want to lead the way in the creation, production, presentation and artist/audience development of contemporary circus. In our 450m2 space in Milan we teach circus disciplines to kids and adults. We thereby organize circus courses and workshops. We believe in circus as a practice for cultural development and as a precious tool for empowerment and audience engagement.  Contemporary circus makes culture easily accessible through its strong physical and visual language. It speaks to an intercultural and an intergenerational audience. Its emotional power enables a low-threshold access to participation in culture. Especially in the current political and social context, contemporary circus promotes international cooperation and intercultural networking for its production as well as its reception. Quattrox4 exists to empower and ignite creativity within diverse communities and works tirelessly to overcome traditional barriers – including age, socioeconomic background and geography – to achieve full engagement with the arts for everyone. In 2017 Quattrox4 we launched FUORI ASSE – contemporary circus in Milan, a season of contemporary circus shows organized in cooperation with theatres and cultural hubs around the city of Milan.

What is contemporary circus?

Contemporary circus is a young and highly interdisciplinary genre. Originating in the 1970s in France, contemporary circus has become an international and independent art form of its own that redefines circus as a new kind of performing art. It is hard to decide on an aesthetic characterization of the genre because contemporary circus is defined, above all, by its diversity. Contemporary circus uses elements out of theater, dance, music, performance art, and new media, among other things, and so creates a multifaceted language. It is a hybrid that both aims to critically examine previous circus forms and to break the boundaries to other art forms and genres. While traditional circus is all about showing off amazing tricks, contemporary circus puts the authoriality of the performer at the core of the creative process. The trick in not anymore used for its own sake, but to shape a new sense of meaning within the artwork. While in countries such as Belgium, France and Sweden contemporary circus has been an established part of their cultural panorama, in Italy the imagery of circus is still mainstream and dominated by the traditional circus companies, which played an important role back in the days. Nowadays contemporary circus is perceived to be on the fringes of society and it has only gradually acquired a small area of cultural awareness which, however, we want to invest on. Internationally contemporary circus finds itself  in a continuous state of creative innovation and aims at establishing networks and innovative instances of cooperation. This is a vision that we want to embrace.

What do we believe in?

Sharing is caring. This is what we believe in! Quattrox4 is a circus lab for everyone. It an open space fully equipped and ready to welcome new ideas, projects, residencies, experiments in order to establish new and unexpected synergies. We believe in diversity and we want everyone to feel at home. If you are ready to look at the world upside down… come and join the circus!

Where does the name "Quattrox4" come from?

Quattrox4 was founded in 2011 by four people: Marco Dellabianca, Clara Storti, Elisa Angioni and Filippo Malerba. While talking about their collective dreams, they realized there were four people sitting at the same table. Based on the idea that mutual help and support maximize the effort of each participant, they decided to call themselves “four by four”. Not only: they knew they where shaping a new pioneering project and they imagined it as a “four-wheel drive” capable of driving off-road and paving new ways to imagination.